My story, Somewhere-on-Sea, has been published by Prole Books in the latest edition of their anthology series, Prole 22. 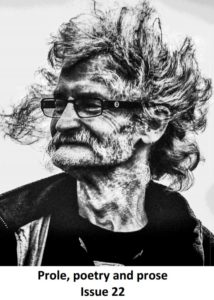 It is a story that I’ve had a soft spot for ever since I wrote it, but as my editor said, this will take some placing. It adopts an old-fashioned style and rhythm which really demands to be heard. If you would like to read it, then pop along to Prole books and buy it as a pdf or print copy or, better still, sign up as a subscriber.

On a generalist note, I have been concentrating on my two novels and so have put short stories on the back burner. I have also decided to avoid the general election. It takes up too much emotional energy and my bitterness at the selfishness of the most leaves me incapable of optimism. So, fuck the lot of them. If you’re not registered to vote, then sign up now. The day before the election, sit quietly on your own and figure out what sort of society you want, then vote for the party that best espouses your view. Tactically vote if you’re in an area where our political system disenfranchises you. Just vote.