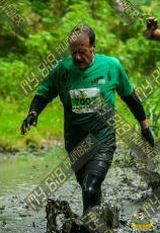 There are few things more satisfying than completing a run that you’ve trained for and the first draft of a novel that you have pushed uphill, one paragraph after another.

In the last month I competed in the 10km Major Series, which is an obstacle race over the said distance, up hills, through streams and mud, and over fences and logs. I finished. I was both proud and annoyed. Proud that I had completed it without injury (at least nothing other than a few cuts and bruises), but annoyed that my time wasn’t better.

I also completed my crime thriller, The Providence Clause. I was happy with the result. My beta readers gave me encouraging feedback. I sent it to my editor with high hopes for minimal feedback and warm words. I received, what in business we call the feedback sandwich. It started with encouragement before slowly ripping it to threads. It finished with ‘I think you’ve got something here, but it needs substantial re-writing’.

He was of course, right. I had lost the suspense of the story by having too many competing narrative voices. I need to focus on the protagonist to the exclusion of all others and create that single pov that will only let the reader in on what he sees. The multiple third person pov I had created had aided me in driving the plot, but it needed to be lost once the full scope had been realised.

So, my rather obvious learning from running and writing is that even at the finish line, you are nowhere near the end.